The development of ALEKSANDAR was primarily prompted by a wish to achieve a significant increase in the rate of fire and introduce a number of new technical solutions, compared to the self-propelled gun-howitzer NORA. Both ALEKSANDAR and NORA can be mounted on different 8 x 8 chassis of appropriate characteristics. The prototype of the ALEKSANDAR system is mounted on two types of vehicle chassis. Reliable solutions mastered during the development and production of the self-propelled gun-howitzer NORA were retained in the design of ALEKSANDAR, such as the ballistic system, the system for platform stabilisation during firing and the fire-control system.

ALEKSANDAR features a different automatic loading system and a system for reloading the automatic loader, as well as a higher level of automation. The automatic loader is connected to the gun’s cradle and it consists of two revolver-type magazines from which projectiles and propellant charges are alternately pushed into the barrel by means of a rammer. Owing to this kind of solution, it is possible to load the gun and fire up to six rounds per minute. In addition to the increased rate of fire, reloading is also faster compared to the NORA system, allowing you to fire the complete combat set consisting of 24 projectiles (12 rounds in the loader and 12 in the magazine with the automatic loading mechanism) i­­n a very short space of time.

The advantages of ALEKSANDAR over NORA include:

• Increased rate of fire up to six rounds per minute

manually in the NORA system)

• All operations are automated, carried out by a

crew of three from the vehicle cabin. The whole

system functions as a Remote Control Weapon Station. With the application of this kind of solution, the time required to fire the first round is decreased to one minute, which is particularly important when engaging time-critical targets.

The weapon station can be mounted on vehicles (four-wheel plus drive), vessels (patrol boats or ships), or any stationary structures (airports, military bases) for perimeter security purposes.

The RCWS 20/3 mm KERBER is armed with a 20 x 110  mm gun effective at ranges of up to 2000 m, and equipped with up-to-date optoelectronic sensors controlled by a power unit (a motor with zero-backlash gear reducers providing easy control and better accuracy at all ranges). Being a low-signature weapon, it is primarily mounted on vehicles, but it can also be installed on ships, fast patrol boats, or stationary structures.

More information can be found at: www.yugoimport.com 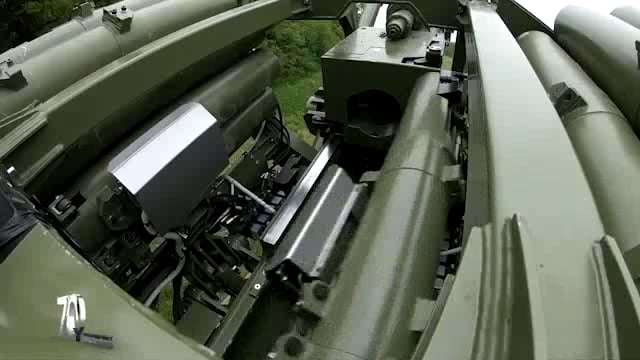